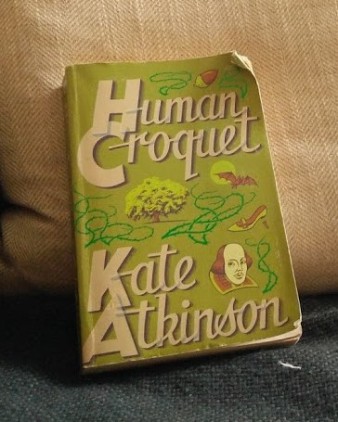 The acorns and conkers decorating the cover of this book led me to believe it would be a perfect read to kick-off  the autumn. Human Croquet certainly had that fairy-tale quality that I crave when the weather turns, but I did feel that something was missing.

I’d hoped that Human Croquet would live up to the brilliance of Kate Atkinson’s more recent novel, Life After Life. Unfortunately I didn’t get off to a good start. In fact, it took about 90 pages to get into the book, even though I could see it had lots of promise. There was just about enough to intrigue me and keep me turning the pages, but it’s hard to ignore such a slow start.

The main character, Isobel Fairfax, is an awkward teenager whose mother mysteriously disappeared when her and her brother were little. They are both still trying to come to terms with what happened, and get no help from their impassive father or their cranky aunt Vinny.

At the age of sixteen, life seems to be taking an odd turn for Isobel. It starts with a couple of mini time-travel trips and, before you know it, other strange things are happening; dogs and babies turning up on the doorstep, people disappearing and reality generally becoming a bit warped.

Weaving through this main story, we also step back in time to learn about Isobel’s mother, Eliza.  She brings a bit of colour to the book with her dark moods and sarcastic comments. Stuck in a boring marriage and living with her husband’s family, she treats everyone with contempt. The pages containing Eliza’s story are particularly readable. And, in fact, once I got into the flow, I really did appreciate Kate Atkinson’s style in general. There are so many literary references and some fantastic turns of phrase, such as “Mr Baxter disapproved wholeheartedly of fairy stories (‘stuff and nonsense’) although whether he had a whole heart was debatable.”

Unfortunately, the book again starts to dip at the end. Just as the stories and loose ends are being tied up, the book loses its charm. The ending seems limp and anti-climatic after the weird and wonderful middle of the novel. I won’t give up on Kate Atkinson, however! I think I’ll be trying A God in Ruins or Behind the Scenes at the Museum next, which I’ve heard good things about.

Try the book for yourself by clicking on the picture below!