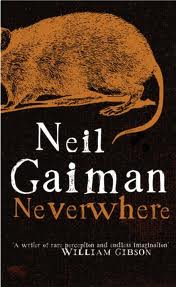 I borrowed this book from a rat loving friend, who first picked it up because of the front cover. She had nothing but good things to say about it (probably because in the story, rats are treated like royalty!), and told me that it felt a bit like an adult version of Harry Potter.  It seems to me that readers are always trying to fill the Harry Potter shaped hole in their bookshelves. One of the things I most loved about Harry Potter was the fact that it was set in a school, so I’ve always found it a bit hard to imagine an adult version. But still, my interest was piqued!

Neverwhere is the first full-length novel by Neil Gaiman that I’ve read but I’m familiar with his writing style because of Fragile Things, a collection of his short stories. I had mixed feelings about that book and can see why people might not get on with the odd expressions and quirky style. However, Neverwhere, being a longer story, gives the reader time to get into the flow of the writing.

The whole idea of the book is very intriguing. It’s mostly set in London Below – a much darker and grittier London than the one that most of us are used to – a place where people end up by ‘falling through the cracks’. This fascinating, topsy-turvy city that exists underneath the streets of the capital is made up of dirty sewers, abandoned tube stations and dark corners where foul creatures lurk.

Richard Mayhew is the bumbling and endearing unlikely hero of the novel. He’s dragged into this strange world by an encounter with a girl called Door. One good deed is all it takes to involve him in Door’s revenge quest to find the people that murdered her family. Helped out by some rather eccentric characters, Richard and Door scurry through London Below, trying to find the truth. Never far away are Mr Croup and Mr Vandemar, a couple of the most creepy and revolting villains I have ever come across!

I thoroughly enjoyed escaping into London Below, but was glad that I was only a visitor – I certainly wouldn’t like to get stuck down there! Neil Gaiman invents the most wonderful places – such as the magical Floating Market – and the most bizarre characters – my favourite being the sarcastic and arrogant Marquis de Carabas, who delivers some of the funniest backhanded comments! Neverwhere is a little bonkers and full of laugh out loud hilarity, as well some scary moments of tension. I think Gaiman most have had a lot of fun creating this world and hope to read more of it one day!

If you would like to enter the wild world of London Below, you can buy the book by clicking the picture below!