For Advent with Austen, I decided upon two versions of Sense and Sensibility to watch; the much loved 1995 adaptation with some very talented actors, and the more recent 2008 BBC TV serial. Having heard good things about the 2008 adaptation, I decided to start with that one. The episodes were also a perfect length to look forward to after work for a few nights.

Looking back, I think it was lucky that I started with the 2008 mini series. I could not have appreciated it as I did if I had watched the 1995 film first. The scenery, script and acting were superb. On the whole the cast was chosen well and there was a lot of talent on show! Hattie Morahan and Charity Wakefield  were brilliant as Elinor and Marianne. Morahan’s performance was utterly convincing as the caring old sister and sensible mother figure for the whole family. Wakefield brought a laughing, smiling Marianne to the screen beautifully, and equally portrayed the more forlorn and hysterical moments very well.

It is important to get these two main characters right, and the 2008 version certainly does just that. I was so pleased with them in fact, that I was slightly worried that Emma Thompson and Kate Winslet would not be as incredible as I vaguely remember them being from when I watched the 1995 film a long time ago.

I needn’t have worried! The 1995 version of Sense and Sensibility was everything that I remembered and so much more. Again, a talented cast and well written script, and with less time to pack everything in, I can forgive it for missing out a few characters and cutting a couple of scenes.

Emma Thompson as Elinor might be a bit controversial, as she is a lot older than her character in the book. This didn’t bother me in the slightest, as it is a lot more realistic when seen by a modern society and doesn’t take away from the plot. Also, Thompson portrays Elinor so well, it is almost like the role was made for her! Without a doubt, I have to say that my very favourite character in both the book and the film is Marianne, played by Kate Winslet. How well she captures the moods of Marianne! She has all the romantic expectations, passion for poetry and of course impulsiveness that I love about her character.

Back to the 2008 mini series, and I was very impressed with the male actors. I found Dominic Cooper an interesting choice for Willoughby because I can’t help thinking he is a little too innocent looking for the part. He did a very good job though, and I was satisfied to see his pain and guilt later on in the film, which I feel Greg Wise did not quite capture as believably in 1995. Also, I think the 2008 Marianne and Willoughby had a good chemistry together. Greg Wise may have been more what I had expected from the character of Willoughby; tall, dark and handsome, confident, eloquent and charming, but he if I could mix the two actors up a bit – Wise’s looks and charm and Cooper’s guilt and regrets – I think I could create the perfect Willoughby!

But now we come to a choice of actors that I am not at all happy with in the BBC’s 2008 series. Edward Ferrars is not exactly the greatest of Austen’s heroes, but I do not think that makes it allowable to completely change his character! Dan Stevens is a smiley, confident, energetic Edward, which is certainly not how he is in the book. Hugh Grant’s portrayal of this shy and nervous character is so much more of my idea of Elinor’s love interest. He stammers and stutters through his scenes, which is at times endearing and others extremely frustrating – which is exactly how I felt in the book! Hugh Grant always seems to play these awkward, bumbling types and does it with ease.

I have to admit though, that if I had not already read Sense and Sensibility, there would be no competition to which Edward Ferrars I liked the most. Dan Stevens in 2008 was so likeable, so much more passionate and so much better looking (sorry Hugh)! I almost wish Jane Austen could have written his character to be more like him! 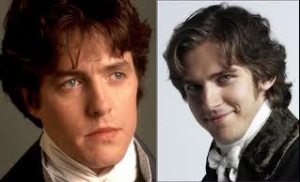 I find it hard to pick a favourite out of the two fantastic actors that played Colonel Brandon. I am aware Alan Rickman from 1995 is probably the most popular, but I have a soft spot in my heart for David Morrissey in the 2008 adaptation. Colonel Brandon is a difficult character to act, as he has to get across a lot of emotions without saying very much. He has to be kind and polite, but not lose his serious and brooding countenance. Both actors really hit the nail on the head.

Overall, I much preferred the 1995 film, not just because of the actors chosen, but because it had an extra spark that was missing in the more recent mini series by the BBC. The only thing that disappointed me was the missing scene of the conversation between Willoughby and Elinor, when Marianne was ill in bed at Cleveland. For me, this is a very important scene to miss out as it is a large part of what helps Marianne to get over him.

Of course, another thing the 1995 film has over any other adaptation of Sense and Sensibility is Hugh Laurie! He plays Mr. Palmer with the comic genius that you would expect from such an actor. Although not a big role, he makes it memorable by being as abrupt as his personality in the book, but showing a warmer side to the character, which I think Austen did hint at in her writing. 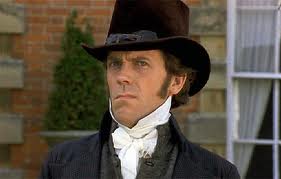