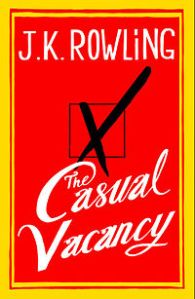 I was not blown away by The Casual Vacancy and hadn’t expected to be, even though there’s (obviously) been a lot of interest surrounding J.K. Rowling’s first book since the Harry Potter series. The plot summary sounded dull and most of the reviews seemed a bit disappointing. I was still very happy to receive a copy for Christmas, because even if I wasn’t expecting great things, I was still curious.

The Casual Vacancy is a bit like a boring soap opera that is trying to be edgy. The book follows the lives of several residents of the small town of Pagford, with the central plot being the recent death of Barry Fairbrother and the space on the local parish council that has opened up because of it. I’m not interested in small town politics at the best of times, but add petty gossip into the mix and I can be quite put off.

There were other storylines of more interest. In fact the book is crammed with other storylines, almost as if J.K. Rowling had a long tick list of soap opera dramas to include. There’s domestic violence, unhappy marriages, infidelity, rape, racism, drug use, adoption and even a hint at teenage pregnancy. I’m not sure it was necessary to include all of these themes, but at least it distracted from the parish council storyline.

From this post, it sounds as though I hated The Casual Vacancy, but really, I just felt indifferent. I enjoyed reading the book over a few evenings as an easy read after work, but wasn’t desperate to get home and find out who would make the seat on the parish council, or whether the teenage boy would manage to get the girl he fancies at school. In fact, I couldn’t really care less about any of the characters. None of them were likeable or interesting enough to make you want to root for them, possibly with the exception of Krsytal Wheedon; the naughty girl with the drug addict mother, but even she managed to get on my nerves by the end of the book.

I think I would have preferred The Casual Vacancy if it had been more light-hearted and positive. The setting and J.K. Rowling’s writing style would have worked nicely with a bit of cheeriness. Instead we have unhappy characters and depressing situations. If there was one thing that took me by surprise, it was how bleak the book became towards the end.

I picked up the book with the intention of not comparing it to Harry Potter, which turned out to be rather easy. This book is nothing like the children’s series, although the writing is very similar. I have always appreciated J.K. Rowling’s simple and concise sentences. The Casual Vacancy certainly lacks magic though, both in storyline and characters. Who would believe that the person who brought such people as Albus Dumbledore, Hagrid and the Durleys (to name but a few) into our lives could write a book with such bland and uninventive characters?

If you’re still curious about J.K. Rowling’s first book for adults, you can buy your own copy by clicking on the picture below.