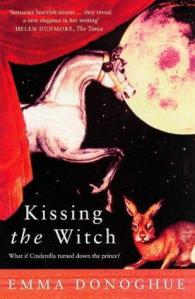 This review at Iris on Books caught my eye a few months ago and the book was added to my wish list straight away.

I read Kissing the Witch in two sittings because, although it’s a collection of short stories, I found it hard to put down. Reading this chain of stories is like opening a Russian doll. The further in you get, the more surprises you find. Each tale is connected to the one before, with the secondary character from the first telling her own story, and then passing on the pen to the next woman. The readers are kept interested because they want to learn more about the character and understand why they have become a witch, a fairy Godmother or how they came to live a secluded life in a cave.

The thing that many readers have found particularly special about Kissing the Witch, is that everything is told from the female perspective. The tales are wonderfully empowering to women. All of the female characters have their own mind and make their own choices – often helped along by other women. Their lives don’t end with living happily ever after, married to prince charming. I found this feminist take on the tales interesting and liked the message of some of the stories. However, more important to me was the fact that we were given the chance to see the backgrounds of the witches and nasty stepmothers, who weren’t necessarily always bad.

Possibly my favourite stories were The Tale of the Apple and The Tale of the Handkerchief. The first is a re-telling of Snow White and concentrates more on the relationship between her and her stepmother. In the second story, a re-imagined version of the Brothers Grimm’s Goose Girl, we go back to when the stepmother was a child. These two stories flow smoothly together, but not all of them do. We don’t find out in all the tales how certain characters got to be who they are. Possibly this has been done on purpose, as in the book one character says, “And what happened next, you ask? Never you mind. There are some tales not for telling…” I still can’t shake the feeling of being slightly unsatisfied though.

The idea of women being in control of their own lives is important to me, but I have to say that I found this book a bit one-sided and at times lacking in subtly. I missed having male characters – because not all of them have to be frisky teenagers, bad husbands and mad fathers. Could we not have seen a little more of the woodsmen or read the back-story of the father that promised away his daughter? Do they not deserve a chance to tell their stories?

In whatever form you already know the stories, this book will show you a different side to them, with some refreshing new ideas. It is unusual but very readable, magical but not silly. In this alternative world of fairy tales, women are not the weak and helpless beings that we are used to. Every evil stepmother or scary witch has their own story. Characters are not necessarily as they first seem and we get to explore this further, in the next story. Cinderella’s fairy Godmother was not always a fairy Godmother and underneath the mask of the Beast in Beauty and the Beast, there might be something very different to what you imagine.

If you would like to buy this magical alternative to your favourite fairy tales, you can click on the picture below.