Hello book lovers, and welcome to a new series of guest posts. These reviews and bookish musings will come from family and friends who have shaped my reading life.

When it comes to books, my boyfriend and I are like chalk and cheese. Fear and Loathing in Las Vegas is one of the only books I’ve ever borrowed from him, so I can’t say he’s dramatically changed what or how I read. But he was there at the birth of Bundle of Books and has encouraged me all the way through. It’s mostly non-fiction taking up space on his bedside table and he’s been reading Gödel, Escher and Bach on and off since I met him. Size doesn’t put him off, as you’ll see from his review of Niall Ferguson’s hefty book about the Rothchilds… 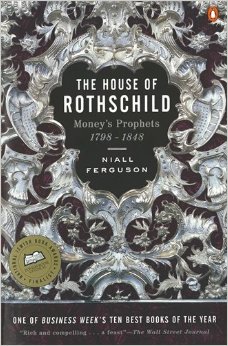 antastically written and informative. This book gives a clear insight into the Rothschild business empire which should be of interest to more than just bankers. Although the book’s title emphasises the power of money, it was the Rothschilds’ innovation in, and perhaps monopoly of, expedient long distance communication which played a central role in their success. They were quick to build political and business relationships across Europe and act upon the intelligence this gave them in a unified manner.

The book is also interesting from a social and political perspective; the treatment of Jews and how this changes with money; the various revolutions; the banishment of a particular family member; the personalities of Nathan and James. Although other reviewers have said you will find no conspiracy theories here, the book is in fact riddled with examples of corruption, from institutionalised bribery of officials to manipulation of the press. There is plenty of conspiracy, it’s just presented as straight forward historical fact rather than something more mysterious and sensational.

One has to wonder if the Rothschilds’ private archive is a fully reliable source of information or if Niall Ferguson is overly sympathetic to the family, however my suspicions are very limited in this regard. For readers who don’t have a background in finance it would have been nice to have some diagrams visually explaining how bond issuing and trading works. Pages upon pages of the book are dedicated to recounting financial transactions, but the underlying mechanics are not given much explanation. This isn’t so much a criticism as it is just a wish, as the book can only contain so much peripheral information.

As others have pointed out this book is large and dense, it occasionally quotes French, uses phrases written in Latin and contains words we popolo minuto couldn’t possibly ever hope to use in a grammatically correct sentence. I am not an expert on such matters, however I believe Ferguson could have achieved the same level of concision without resorting to infrequently used words when there is a common synonym. That said, if it does delve into academic technical terminology, I didn’t notice, it just seems a bit unnecessarily wordy in places and is not as accessible as the other history book I have read.

Want to try it yourself? Click on the picture below!