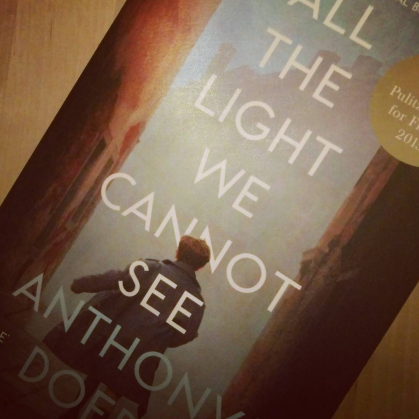 There is so much I loved about All the Light We Cannot See. I was captivated by the poetic writing, I cared about the characters and I really, really wanted to know what would happen. At times my eyes were glued to the page for hours, and it’s been a while since I’ve felt that way towards a book. However, there were a few negative points, which I will get to in a few moments. First of all, I will set the scene…

Set before and during the Second World War, All the Light We Cannot See is about two children whose paths are destined to cross. Blind Marie-Laure lives in Paris with her father, before fleeing to the port city of Saint-Malo to stay with her great-uncle Etienne. Over in Germany lives orphan Werner with his sister. Werner has an incredible skill with radios and has so many questions, “Why do some fish have whiskers?”, “When lightning strikes the sea, why don’t all the fish die?”. His intelligence does not go unnoticed and he is soon whisked off to a prestigious school for the Hitler Youth.

There is a hint of magic in All the Light We Cannot See – a subtle suggestion, rather than full-blown sorcery. This comes in the form of a priceless, and supposedly cursed, diamond called the Sea of Flames. At the beginning of the novel it is held in the Natural History Museum where Marie-Laure’s father works as a locksmith. The intrigue surrounding the diamond adds an interesting mystery, reminding me fondly of The Moonstone. However it’s the writing, rather than the various plot lines, that drew me into this novel. Marie-Laure’s blindness opens up a whole new perspective of the world. This, mixed with her vivid imagination, leads to some beautiful descriptions. Marie-Laure can sense unease in her father with “…his thoughts fluttering like trapped birds” and she “…imagines his head as a cabinet filled with ten thousand little drawers.”

My favourite passage describes Marie-Laure’s great-uncle Etienne who suffers from post-traumatic stress after his experiences in the previous war, “…she can almost feel the terror pulsing inside him. As though some beast breathes all the time at the windowpanes of his mind.” The relationship between these two damaged characters is very moving. Gradually Marie-Laure brings Etienne out of his shell and helps him to heal. I could quite happily have read a whole novel exploring this.

Although Marie-Laure’s life can seem scary and unfair, she is loved and has people on her side. In contrast, Werner’s days consist of distressing scenes of violence and cruelty. He is confused and trapped in a world he had never wanted to be part of and can’t see a way out. There is definitely an element of pulling on heart strings in this book, which some readers may find too much.

And so now I come to the negative points of Doerr’s novel. The chapters are very short. At first this made me want to read “just one more chapter” before bed, but soon the book lost momentum, especially towards the end. This was not helped by the constant flitting between not only the two characters in France and Germany, but also different times in their lives (spanning approximately ten years). I think this novel is unnecessarily ambitious. A simpler structure, more tightly edited and with fewer storylines, could vastly improve the book. Instead, my lasting memory is of a long, drawn out ending.

To get hold of your own copy of All the Light We Cannot See, click on the picture below!

4 thoughts on “All the Light We Cannot See – Anthony Doerr”