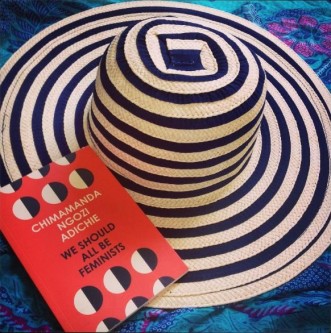 We Should All Be Feminists is a modified version of Adichie’s 2012 TEDx talk fit into a small, slim book. Like the straight talking title suggests, this is a clear, simple exploration of feminism.

Everyone seems to be talking about feminism at the moment. So many women (and men) are doing their bit to change attitudes. I can’t log on to Twitter or turn on the radio without hearing yet another debate about feminist issues. And that’s great – young girls and boys should be brought up to think and talk about this, but all these discussions can often be overwhelming. Should I be a Hot Feminist like Polly Vernon? Do I want to be told How to be a Woman by Caitlin Moran? Well Adichie’s essay is the perfect starting point and in my opinion should be read by everyone.

We Should All Be Feminists isn’t ground breaking. It’s a back to basics exploration of what it means to be a feminist. Adichie isn’t aggressively trying to introduce a controversial new theory, but that is why it’s so effective. Her approach is gentle, non judgemental and accessible.

Adichie eloquently breaks down the preconceptions and judgements surrounding the idea of feminism. When she is told that she shouldn’t label herself as a feminist, because they are unhappy women who can’t find husbands, she calls herself a ‘”Happy Feminist”. After more criticism she ends up being a ‘”Happy African Feminist Who Does Not Hate Men And Who Likes To Wear Lip Gloss And High Heels For Herself And Not For Men”. Within a couple of paragraphs she has expressed my thoughts exactly. I don’t want other feminists to tell me what to think and how to behave. So I’d like to thank Chimamanda Ngozi Adichie for reminding me that I can be any type of feminist I want. And you know what, being a “Happy Feminist” sounds pretty good to me.

Check out the full TEDx talk below.

Or buy the book by clicking on the link below…

3 thoughts on “We Should All Be Feminists – Chimamanda Ngozi Adichie”