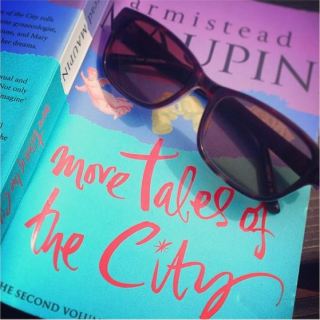 Ever since reading Tales of the City, I have been desperate to read the next in Maupin’s fantastic series set in San Francisco. I chose to read More Tales of the City on a hot and sunny weekend trip to a small town in the Czech Republic. From now on this book will forever remind me of lazing in the sun surrounded by blue skies and the lovely Czech countryside.

More Tales of the City steps a little further into the lives of some of my favourite people; Michael ‘Mouse’ Tolliver, Mona Ramsey, Mary Ann Singleton and of course Mrs Madrigal. I was also happy to see a reappearance of Mona’s ex, D’orothea and the pregnant DeDe, who form an unlikely, but heart-warming friendship.

The book opens with Mouse and Mary Ann’s valentine resolutions. Mouse’s are brilliantly titled ‘Michael Tolliver’s Dirty Thirty for ’77’. Mary Ann’s list is a little shorter with only four resolutions;

4. He won’t be a child pornographer.’

Well, isn’t that every single girl’s hope? Luckily for Mary Ann, we don’t have long to wait for Mr Right to show up in the form of handsome Burke Andrews. They very quickly fall helplessly in love while on a cruise to Mexico. But it can’t stay smooth sailing for long, and it turns out that Mary Ann’s dream man has a strange illness that makes him vomit every time he sees a rose. The plot thickens with a storyline that includes amnesia, conspiracy theories and an odd man with a hair transplant…

As with Tales of the City, More Tales is arranged into short and sharp ‘chapters’, which always makes you want to read a little bit more before putting the book down for the day. Dispersed between these ‘chapters’ we also have the gradual revealing of the mystery that is Anna Madrigal. Mona’s spontaneous plan to get away from the city for a few days ends in a visit to Winnemucca after being invited to Blue Moon Lodge (‘the best damn whorehouse in Winnemucca!’) by Mother Mucca. This visit leads to huge revelations that will forever change the relationship between Mona and Mrs Madrigal.

If it’s possible, I think I enjoyed this book more than the first in the series. It’s got more drama, more romance and more hilarity. Who would have thought you could cram so much into 288 pages!

If you haven’t already read Maupin’s wonderful series, I suggest you start straight away! You can buy More Tales of the City by clicking on the picture below!

5 thoughts on “More Tales of the City – Armistead Maupin”