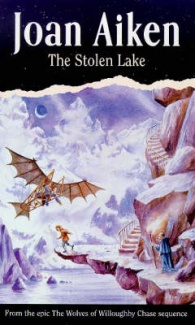 Next in the Wolves of Willoughby Chase series, we have The Stolen Lake. It’s a wonderfully eerie book set in the strange country of New Cumbria, where Captain Hughes of the Thrush has mysteriously been sent for by their Queen. This is unfortunate for our heroine Dido Twite, whose journey back to England is interrupted once again.

Dido and a select few members of the crew, including the Captain, are immediately struck with the strangeness of New Cumbria. The people are distant and shifty and where are all the children? It’s clear that no one can be trusted!

Captain Hughes plans to see the Queen of the country as soon as possible and get the whole adventure over with, but things are never as easy as that in a Joan Aiken book!

The Stolen Lake has a darker tone to the others in the series so far. The ghastly Queen Ginevra, with her flabby, pale skin and greasy hair, lolling on her bed is more dreadful than any of the previous baddies. Although there is still plenty of humour, especially when Dido is forced to meet the Queen in a pretty and extremely girlie dress. Queen Ginevra’s mad ravings about her long lost husband and a stolen lake does not stop Dido and the others from embarking on a possibly wild goose chase. But secretly Dido has her own mystery to get to the bottom of; cats keep popping up with coded messages wrapped up in their collars – there’s someone out there that needs her help.

I do love how The Stolen Lake slips into magic and legend. It ticks all of the right boxes for what children want from a book; it’s absurd, it’s dark, it has revolting baddies, a heroic and funny protagonist and a fantastic journey through the dangerous unknown.