A couple of years ago I started to work for a large allotment site. I don’t have the greenest of fingers, but do enjoy pottering about on my balcony with the odd plant. What I love about ‘my’ allotments is the history, the sense of community and the beauty of the site. Neil Patrick’s debut novel has similar topics at its heart.

The Healing Hut starts off as far from a cold, grey British allotment site as you can get, in sunny Australia where expat Kyff lives with his wife. His life comes tumbling down around him when he learns that his wife has had an affair. Shortly afterwards, he leaves Australia to attend his father’s funeral. It is a rather slow beginning, especially if you are eager to read about the allotments! But as soon as Kyff arrives in the UK, it feels as though the story really begins.

The book centres around Kyff’s difficult relationship with his father. After the funeral, he stays in his home town to get his life back on track. He takes over his father’s allotment and gets to know the eccentric plot holders. With the help of his new found friends and the physical work and satisfaction of gardening, he gradually begins to heal. He discovers the man behind the father he thought he knew and takes on the fight to save the beloved allotment site.

The things I enjoyed most about The Healing Hut are the characters and the setting of the allotments. The allotment holders are an odd bunch and I would have liked to see even more of them. Their love for their gardens reminds me of plot holders that I know, who feel very strongly about their little patch of land. I can’t say that any of the characters in the book are like people I’ve met, but allotments sure can attract eccentric people!

My biggest problem with The Healing Hut is that it feels as though too much has been stuffed in; too many storylines and topics. A simpler story, focusing more on the characters and why they love their allotments could have meant so much more. However, I’m glad I read this debut novel. There’s an interesting exploration of different types of loss and the healing process.

I would like to say a big thank you to the author for kindly sending me a copy of the book and agreeing to answer a few questions! Now let’s get to know Neil Patrick …

It really feels as though the writing in The Healing Hut has come from the heart. Did any of the story come from real life experiences?

You’re right in believing that the book was written from the heart. As with every novel, some of the life experiences of the writer are enmeshed with the fabric of the book. But The Healing Hut is far from biographical.

When and how did the idea for this novel first occur to you?

I first got the idea for writing a book – some sort of book – set in allotments many years ago when I moved from newspaper work to take a job on a gardening magazine. It was then that I really got my hands dirty… and also really plunged into allotment life.

I soon realised that I was part of a community. There I found friendship, advice, shared confidences; at the allotment I de-stressed and appreciated the wonderful variations in the British weather and the joy of the changing seasons.

One day I came back from holiday and, calling at my plot, I was greeted by a glum-faced posse of fellow-gardeners.

Had we lost one of our number? No – but they told me that my entire crop of giant onions had been pinched while I was away!

How long have you had an allotment?

I have had allotments at various points of my life but since the age of 21, whenever I didn’t have one, I always stole a portion of garden to grow veg. I have no allotments near where I live now so have created a raised vegetable garden with fruit trees right on my doorstep!

Your characters are quite eccentric, did you base any of them on real life allotment holders that you know?

I’ve met some wonderful characters on allotments and many appear heavily disguised and exaggerated in The Healing Hut. People have been kind enough to say that the characters were so “real” that they must exist. They do – in my imagination. It is most gratifying for an author when people start talking about your invented characters as if they really live and breathe. 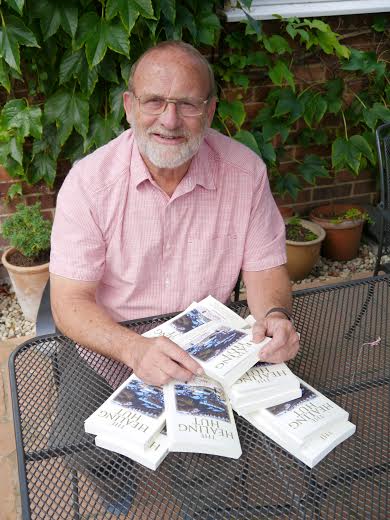 The Healing Hut is self-published, why did you choose to self-publish and how easy was the process?

I decided to self publish because having circulated the novel among potential publishers, and then attended a seminar explaining how the profession operates, I concluded that I’d do it myself!

The fact is most manuscripts aren’t even properly considered by publishers and I proved this by devising a built-in test to check whether the story had been looked at.

Self-publishing has been wonderfully satisfying and has let me keep control all through the process.

Of course there is prejudice over self-published books. For instance, although my book has a strong Welsh flavor, the biggest newspaper chain in Wales wouldn’t mention it because it is self-published.

My local Waterstone’s showed an encouraging open-mindedness and helped the book on its way.

Your novel was a finalist in the category of ‘Inspirational Book of the Year’ in the Garden Media Guild Awards 2013. How did this make you feel?

Getting such a mention in the garden awards of the year was thrilling, especially as I understand that novels are not generally accepted for the awards which tend to be for non-fiction. It told me that the judges knew that my veg knowledge was sound but best of all that I’d shown, through a story, the enriching life experience an allotment can give.

And finally, allotments are very popular at the moment. We have quite a long waiting list! Do you have any tips for beginner gardeners?

I hesitate to give advice on gardening except to say to potential allotment-holders – get one when you can! If there was one big lesson I’ve learned it’s that little and often (in terms of work) is better than entire, exhausting weekends.  Half an hour with a hoe on a regular basis keeps those opportunist weeds in their place!

Neil has worked in journalism for 50 years. Much of that time was spent on local papers but he switched to working on gardening magazines 20-odd years ago and, after spells on Garden Answers, and as deputy editor of Garden News, then went on to become deputy editor of Choice, a magazine for those approaching retirement, and to the national magazine Yours, where he was editor for 12 years.

If you like the sound of Neil Patrick’s book, please click on the picture below for your own copy.