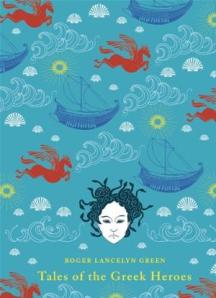 Over the past year, when reading certain books, I’ve felt as though I am missing something. The feeling first started when I read Donna Tartt’s The Secret History a few years ago, but I always assumed that I was just too young to fully understand the book. But more recently, when reading Ali Smith’s Girl Meets Boy, The Magus by John Fowles and many other novels which hint at or are inspired by Greek mythology, I have felt completely out of my depth. References that other people seem to fully understand fly right over my head.

I don’t remember learning much about Greek mythology when I was at school, which I find quite shocking seeing as it plays such a vital role in our culture – especially art and literature; two subjects I have an interest in. Wanting to catch up, I immediately researched and decided to buy a well-respected translation of Ovid’s Metamorphosis.

If you’ve ever tried to read Ovid with no previous knowledge, you’ll know that it’s quite a big confusion of prose, odd names and weird stories. So before fully emerging myself in such a daunting version, I thought I would try a much simpler route instead. Off I went to Waterstones to rifle through the children’s section…

Although Roger Lancelyn Green’s Tales of the Greek Heroes is about the Greek heroes rather than the Gods, the Immortals do play a huge part, and we get the basic outline of some of their stories, including the very beginning. Sitting in Waterstones for about an hour, skimming through the various different retellings and informative guides of Greek mythology, Roger Lancelyn Green’s book stood out. As well as a beautiful cover, there is also a brilliant introduction from Rick Riordan, the man behind the children’s series Percy Jackson, and that’s what really persuaded me to choose this particular book.

I was happy with my choice because it is a nice, brief outline of some of the main stories, lots of which I recognised. It was a quick and easy read, with a simple explanation of the legends and a clear and concise introduction to the main Gods and heroes. It has even made me want to search out more children’s versions with more detailed stories of particular heroes and Gods. For example, I would love to read a swashbuckling tale of Jason and the Argonauts or a more in-depth version of the twelve labours of Heracles. I look forward to reading more about Troy and would love to get to know the good Titan Prometheus much better.

Another point to add is that Roger Lancelyn Green’s book is great for kids. There’s lots of gore, terrible monsters and clever plots, as well as being a brilliant introduction to Greek mythology. It’s definitely something that I’d have benefited from reading when I was younger. Also, the handy glossary of the different names of the Gods and Goddess of Ancient Greece at the back is probably going to be very useful in the future, to keep my mind from getting tangled!

After reading Tales of the Greek Heroes, I have also started to crave a holiday to Greece. The descriptions of Greece in the first chapter make it sound like some sort of heaven on earth and I’m sure knowing the famous legends and myths would make it a very interesting place to visit.

I think I still have a long way to go before I feel utterly confident to read Ovid’s Metamorphosis, but I’m sure I’ll really enjoy every minute of getting to the right level!

Want to buy this for yourself or as a present for a child? Click on the picture below!

11 thoughts on “Tales of the Greek Heroes – Roger Lancelyn Green”