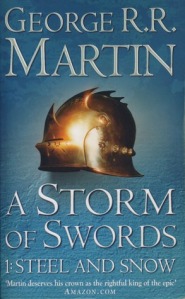 Words cannot explain how much I am enjoying the A Song of Ice and Fire series and especially the first instalment of the third book. (NOTE: If you have not finished the first and second books in the series, A Game of Thrones and A Clash of Kings, you will find some spoilers in this post).

As I have mentioned in a previous review, compared to the fast paced opening book, I found A Clash of Kings to be a bit of a disappointment. The plot dragged and got bogged down with unnecessary details and a lot of battles. Well, there are no such problems with A Storm of Swords: Steel and Snow.

At the end of A Clash of Kings, we are left, as always, with a handful of cliffhangers. Things have gone from bad to worse for the Stark family. Catelyn is in a similar state of distress and grief as at the end of A Game of Thrones. Her youngest sons, Bran and Rickon, who she believes to be dead, have gone their separate ways after the burning of Winterfell. Her daughters are still no closer to being safely reunited with her; Arya is somewhere in the dangerous wilderness between Harrenhal and Riverrun, and Sansa is still in the clutches of Queen Cersei and King Joffrey.

Things are also not looking good for some of the main characters in King’s Landing. Tyrion may have proved himself to be brave in battle, but has received a terrible injury. Also with the return of his father, the power structure is about to change drastically. Tyrion’s brilliant plan to set the waters aflame with wildfire worked just as he had hoped, leaving a mass of screaming bodies and burning wood. Amidst all the panic and terror are Davos and his sons, whose fates are uncertain – who could survive the horror of the flaming waters? Meanwhile, their King, Stannis, has fled back to Dragonstone and the red priestess who is waiting for him. Melisandre is not seen much in Steel and Snow, but enough to know that she is up to no good.

However, it’s not all doom and gloom in Steel and Snow. Far from the Seven Kingdoms, Danearys’ luck seems to have turned. Her dragons are growing and she has been offered help from her old guardian in Pentos. Her most loyal companion, ser Jorah does not trust these offers and urges the her to take matters into her own hands. They change course and head for the sweltering heat of Slaver’s Bay in search of an army. What they find there horrifies Danearys, but with enemies at every corner, what choice does an exiled Queen have?

Danearys’ storyline has been my least favourite so far. She may be a strong and feisty female character, but I find her so irritating! It could have something to do with her almost constant nakedness, but mostly it’s her self-important, self-obsessed, whining and moaning. We all know that she is the rightful Queen, how many times does she have to tell us? However, I was starting to quite enjoy her chapters in Steel and Snow, especially the comical dialogue between her, the slave trader and the translating slave girl. The stories of the Unsullied are also interesting and I look forward to seeing what becomes of them.

In a slightly colder climate, another character is continuing his own perilous journey. One of my favourite characters, and in my opinion one of the most intriguing plot threads of all is still Jon Snow and his adventures beyond the Wall. At the end of A Clash of Kings, Jon’s story has the best cliffhanger of the lot. After being cornered by the wildlings, and with no hope of escape, Jon has been given some last orders from Qhorin Halfhand; “ride with them, eat with them, fight with them, for as long as it takes”. Life for Jon in Steel and Snow becomes complicated and confusing. Playing the role of ‘turncloak’ is more difficult than he could imagine, especially when a wildling woman is involved, teaching him a few things about love, life and freedom.

As well as the characters that we already know and love/hate, Steel and Snow also gives us an opportunity to see into the minds of some characters that I have been hoping to learn more about. There are some big fans of Jaime Lannister out there (is it because of his dashing good looks, maybe?) so I have been expecting a chapter viewpoint from him. I also assumed that there must be more to him than just throwing children out of windows. Jaime is actually a great character to follow. He is arrogant, brave and rather funny. His banter with the man-like Brienne is also a nice distraction from all the seriousness that is going on elsewhere. In previous books we have heard a lot about the Kingslayer and finally the reader can begin to form their own opinion. I am still uncertain about Jaime Lannister, but I can feel myself slowly softening towards him as we start to see a different and, if you can believe it, slightly insecure side to him.

I was also glad to find Samwell Tarly has his very own chapters in Steel and Snow. He is a character that it is hard not to like and I do worry about him now that Jon is no longer around to watch over him. I have always suspected that Sam is made of stronger stuff than other characters might imagine. Sam’s journey is living up to everything that I have come to love about the stories of life beyond the Wall and I am proud of this particular brother of the Night’s Watch.

So far Steel and Snow is my favourite book in the A Song of Ice and Fire series. Not only is it fast paced with a gripping plot, but I also feel as though the characters are actually getting somewhere. I care more about who lives and dies than ever before and really want to know where their stories will take them to next. I’m hoping the second part of A Storm of Swords will live up to the first!

The writing in this book has also been less annoying. There is noticeably less detail when it comes to food and clothes – this is another reason for the book being so readable. Although the phrase ‘truth be told’ still makes me frown, I find it easier to ignore. A new phrase to add to the list though, thanks to Jon Snow’s new friend Ygritte, is ‘you know nothing, Jon Snow’. I really hope I don’t have to read that as often in part two!

Bring on A Storm of Swords: Blood and Gold!

If you are ready to read A Storm of Swords: Steel and Snow and have not already got a copy, you can buy it by clicking the picture below.