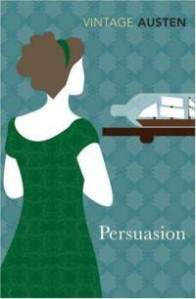 I like to think of Persuasion as a bit of a back-to-front love story. There is no gradual falling in love and no eyelash fluttering flirtations leading up to an engagement – at least not for Anne, the pretty and polite protagonist. There may be girlish flirtations and gossip involving the other girls in her circle, but Anne’s heart was taken seven long years earlier, and now can never love another. The man in question is Frederick Wentworth, a good looking and decent enough man, but who at the time had “nothing but himself to recommend him”. At the age of nineteen, young Anne was persuaded by her father and her loyal friend Lady Russell to pull out of the engagement.

For seven years, broken hearted Anne must go through life wondering what could have been, regretting the past and trying to forget the love that she can never quite get over. Until one day, chance should once again throw Anne and Captain Wentworth back together. The situation is very different now, Captain Wentworth has made his fortune and climbed up in society. He has many admirers among Anne’s friends, who know nothing of their past. Captain Wentworth is cordial towards Anne, but has he forgiven her? Has he moved on? Oh, there are so many questions, hopes and doubts running through poor Anne’s head, it is like she is that confused nineteen year old girl all over again!

It is difficult to explain my feelings about this book, because I have mixed thoughts. I have to admit that it has a very dull opening, where we are introduced to the greedy, vain and self-centred Sir Walter Elliot and his eldest daughter, Elizabeth. Anne is hardly mentioned until the second chapter, and at first she comes across as a plain and boring character. This usually has me worried – nobody likes a boring protagonist! In fact, Anne doesn’t really come into her own until Captain Wentworth appears and the pace of the novel doesn’t pick up until towards the end of the first volume.

By the time the second volume has begun, the confusing thoughts of Anne and the doubts in the reader’s mind have managed to grab a hold and create an unlikely interest in the outcome of the novel. The second part of Persuasion is mostly set in Bath, where there is more variety of characters and a new possible love interest, Mr Elliot, a distant relative, who clearly admires Anne greatly.

The exploration of society and class discrimination through Jane Austen’s ironic descriptions in this section of the book is, as usual, amusing and witty. Compared to Sense and Sensibility, the characters seem to be nastier and the view of society more serious, but maybe that is because the book itself is generally more pensive and subdued, rather than having the rush and excitement of first love and first entering society.

By the end of the book, my heart was well and truly fluttering and it is enough to say that the plot really does step up a notch, even if it is never what you would call fast paced. Persuasion is definitely a thinking person’s book. Lots of things are unsaid, and rather hinted at in the tone of someone’s voice, body language or a certain facial expression. I can see how Persuasion might not be everyone’s cup of tea, but I am certainly glad to have read it!

I read Persuasion as part of Advent with Austen hosted by @readingwithtea. So take a look at her blog if you fancy joining in and having an awesomely Austen lead up to Christmas.