I have to admit that I am not the world’s greatest fan of poetry. In fact, I haven’t opened a poetry book since I studied Philip Larkin seven years ago (a brilliant poet by the way!) So when I received Yahia Lababidi’s email with the offer of a free copy of his latest book, Fever Dreams, I was both excited and a little nervous at the prospect.

I chose a peaceful Saturday morning to read through the poems, with only the occasional sip at my tea to disturb me. I was pleasantly surprised by how much I enjoyed the quiet time I spent with Fever Dreams, away from the rush and bustle of the modern world.

Words, the appropriate opening poem of Fever Dreams is, as you might have guessed, all about the importance of words. For a poet and aphorist, words are the tools of the trade, along with a creative flare. Lababidi believes strongly in the careful use and placement of certain words. This is demonstrated in his aphorisms, which are widely read.

‘Certain words must be earned

Just as emotions are suffered

Before they can be uttered

-clean as a kept promise.’

Words is a strong opener but can he keep it up? It is clear in the following poems that Lababidi sets his words down with deliberate care, as any poet should. But often I found myself halfway through a poem, wondering why certain words had been used. Sometimes, a phrase or line seemed out of place and to disturb the flow of the poem. Or possibly it is that some of the poems are simply too long. For example, Inheritance, a lengthy poem about the unwanted things that we inherent, physically and emotionally, is a full seven stanzas with long lines. This is a common occurrence in poems such as Dog Ideal and Dawning, making sections of the book unmanageable and drawn out.

The shorter poems have a rhythm which I much prefer. A personal favourite of mine is I Saw My Face, a simple yet effective poem about a small revelation while drinking a cup of coffee.

had stirred me to the depths

and left everything swirling.’

–I Saw My Face 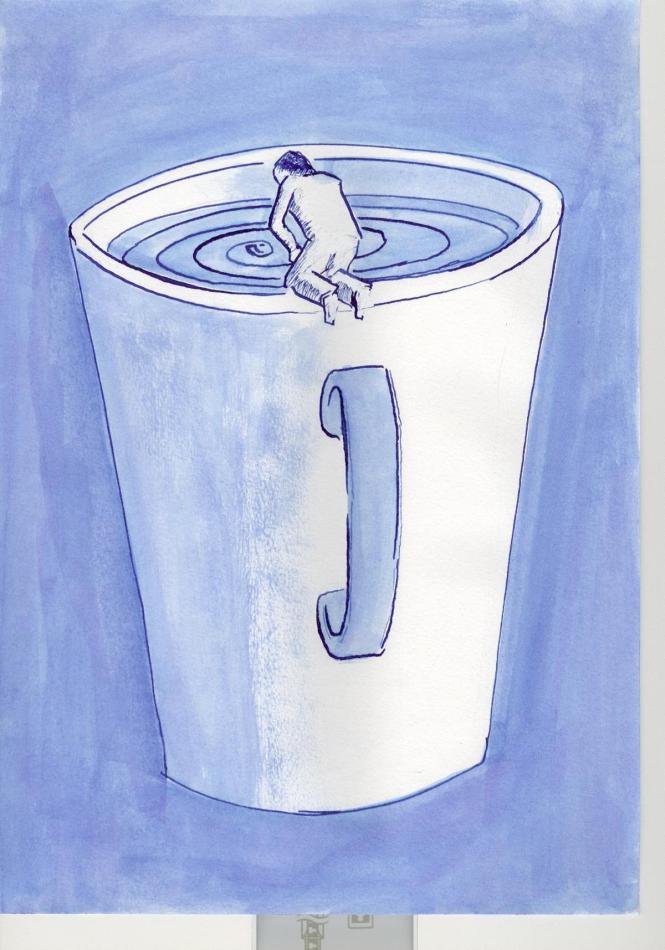 Many of the poems in this collection produce some incredible imagery, whether it is of beauty or a sinister portrayal of a haunting dream. Dusk Scuttles is an example of the former; A lovely, descriptive piece, creating a dusk that ‘scuttles quietly like a crab’ and a moon that is ‘an ivory button’ emerging from the sky. This poem has a charming innocence, comparing the footprints of birds to ‘the shape of airplanes’.

The more sinister poems seem to linger on the doubts and fears of the soul. The Art of Storm-riding is an interesting example. It is a disturbing poem which, with phrases such as ‘I nearly choked on the forked tongue of my spirit’ fill the mind with nightmarish images. It is not immediately obvious to me what The Art of Storm-riding is actually about, but it certainly has my imagination working hard. I have to admit that I do not fully understand the entire poem, but it has an extraordinary ending, which leaves me feeling uneasy.

hoping the unhinged night will pass and I remember

how once I shielded my flame.’

Fever Dreams is illustrated by the artistic John Tillson. The images complement the more disturbing poems such as The Art of Storm-riding and The museum-going cannibal, a horrifying poem about people who seem normal on the outside, but really have a secret, violent second life. The colouring is simple, mostly in different shades of blue, which add to the unnerving effect of  Lababidi’s words.

One illustration is particularly haunting and unforgettable. It portrays a frail man sorting through his wardrobe. The poem, In Memoriam is a moving description of a dying man trying to fight cancer with patterns and bold colour, ‘as though, dipped in terror, he somehow acquired color’. It is a sad ending of life, but the poem is strangely uplifting, as the man tries to open up and smile more.

‘This was his last, graceful stand

emaciated and wasting away

somehow,to give style to death’

After reading Fever Dreams, I was eager to meet the man behind the words. I sent over some questions, and was pleased to find that Yahia Lababidi is friendly and helpful. He promptly replied with some insightful answers about his inspirations, his heritage and his favourite books!

Q. It is apparent in both your poetry and aphorisms that words are very important to you. When and why did this interest with words and language blossom?

Hard to say, but my guess would be in my teens.  First fantasy – Roald Dahl, the Wizard of Oz series, Narnia Chronicles, etc… then horror – Stephen King took care of that, and finally in my late teens it was spiritual fiction, such as Hesse and Gibran.

By the time I’d read Wilde’s Picture of Dorian Gray, which seemed to combine all these elements (fantasy, horror, spirit) I just knew…

Q. Your words seem to be chosen and organised with great care and deliberation. But do your poems and aphorisms start as an idea and grow, or simply appear in your mind?

Sometimes, like dreams it seems like psychic flush.  I suppose certain things are noted and stored throughout the day, and then passed onto my subconscious…

I’m always almost startled when a new poem surfaces, out of the blue it seems, begins to bloom in thin air. With aphorisms, they’re mostly quotes from the ongoing conversation I’m having with myself.

Q. In Fever Dreams you dedicate a poem to Sylvia Plath and quote from renowned  psychiatrist and author Viktor E. Frankl. Who and what else gives you inspiration?

Everything, really.  I think it’s a matter of attention.  The closer attention I pay, the stiller I am able to become, the better I am able to overhear the chattering of all things…

Rilke is an inexhaustible source of inspiration, Nietzsche before him.  Lately, mystical poetry is a great source of sustenance, whether it’s Sufi or Tao.

Q. One theme I have noticed in Fever Dreams is the idea of soul-searching and asking questions about oneself. For example, ‘Inventory’ shows the uncertainties one feels, even at the age of thirty-six. You describe yourself as ‘a human impersonator’, is this how you really feel at times and how do you overcome these thoughts?

Well, I’m 38 now and, yes, I’m still sorting things out, almost on a daily basis, forgetting to remember the lessons I’d learned the other day.  I think writing is a way to make sense of the chaos, inner and outer.  And,yes, at times I do feel like an alien sent from Elsewhere to observe your species… that’s why I’m always note-taking 😉

Q. You grew up in Egypt and now live in the US, but your heritage and background does seep into you poetry. For example, I found ‘Cairo’ very intriguing, can you explain the poem?

Cairo is a love letter to a city, and all that I left behind when I made the US my home, over 5 years ago, now.  What is to Give Light, is another poem inspired by the Egyptian Revolution and the Arab Spring.  But, generally speaking, I don’t tend to write political poems, or culturally specific ones for that matter.  Inner space is usually the place I’m getting lost and found in, and I’d like to think anyone, irrespective of their background, might find something that resonates wtih them in my meditations. 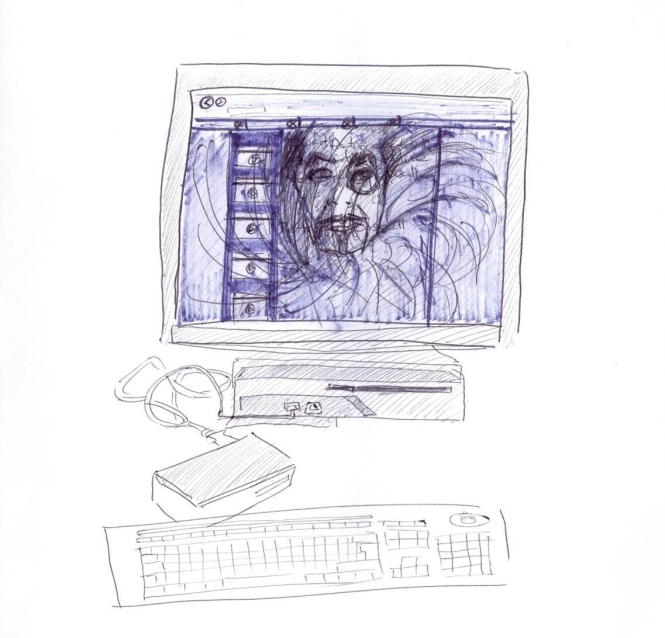 Q. A number of your poems describe the impersonal and ‘soul-less’ effect technology has had on the world, and yet you have embraced the Internet to share your aphorisms. On the whole, do you think the benefits of technology outweigh the negatives?

I’m conflicted about technology.  Part of me wants nothing to do with it, but I recognize that would be cutting off my nose to spite my face.  Another part of me views it as a necessary evil, the enemy of concentration or deep thinking.  But, I think there is a way to cut through the clutter, and use it as a tool to communicate and more importantly, to connect. Which is what literature is about to an extent, touching souls with strangers, and technology can be helpful in that regard too, if used judiciously and mindfully.

Q. You are most well-known for your work as an aphorist. I read in an interview recently that aphorisms express your soul and poetry expresses your heart. Obviously both are very significant in your life, but if you had to choose between the two, which would you keep and why?

Good question.  I’m divided enough as it is, and I guess you’re asking me which fragment better represents the whole…   The aphorist in me thinks the essayist too wordy, since they are an essentialist, and the essayist thinks the poet too wet, since they are more analytical.  Ultimately, I think for sanity’s sake, I need to keep all three, to express my different selves at different phases, or even through different moods.

Q. Finally, I may not be the hugest fan of poetry (although you have reawakened the spark I felt for it when I was at college), but I love settling down with a good fiction book. Do you have a favourite novel?

So hard to play the favorites game…  It changes, so often.  Right now I’m obsessed with John Banville, who seems to me both a poet and a philosopher rolled into one.

So it has certainly been a reawakening. Reading poetry again has reminded me how peaceful it can be to sit down and ponder the exquisite arrangements of words. Although Lababidi’s poems may not all be to my taste, he has a passion for language and philosophy that is catching and he has opened up my mind to something that I would never usually have looked into.

If you are interested in checking Fever Dreams out for yourself, you can buy it here.

Take a look at Lababidi’s Amazon site too, for his other work.