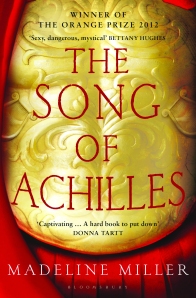 Even with all the hype surrounding Madeline Miller’s debut novel, I was sure that I would not be disappointed when I read The Song of Achilles. And I’m relieved to say that I wasn’t!

As I mentioned in my post about Roger Lancelyn Green’s Tales of the Greek Heroes, I only have a vague knowledge of the Greek myths. So I opened The Song of Achilles not really knowing what to expect.

The book is narrated by Patroclus, an unlucky young prince who is banished by his own father to live in the court of King Peleus and his brilliant son Achilles. Achilles is a demigod destined to grow up to be a hero, and at first Patroclus resents him. Why couldn’t he be as perfect as Achilles? His resentment leads to a confused admiration, friendship and eventually the two become lovers.

I have no idea whether Patroclus and Achilles are ever more than close companions in The Iliad, and perhaps one day I should read it and find out! But their relationship made the book so captivating. Miller’s descriptions of the awkward, pre-pubescent confusion that Patroclus experiences bring his character to life.

Through their young adulthood, the couple manage to stay together, even when Achilles’ powerful mother, Thetis, tries to keep them apart. And when Achilles is sent to Troy to fight and become a great hero, Patroclus follows him. It’s in Troy that our narrator really comes into his own. He does not often fight, but is useful in the medicine tent and becomes friends with the people in his camp. In fact, he has never before been so highly regarded. His largest worry is Achilles and a dreaded prophecy that is constantly in the back of his mind.

The Song of Achilles is extremely readable. The battle scenes, seen through the eyes of the gentle Patroclus, are not too long and bloody, but still fill the reader with horror. Before reading the book, I had been worried that there might be a lot of characters, but only the important ones are mentioned here, meaning newbies like me won’t get too confused. Achilles himself does not come across as well in the Trojan war as Patroclus. His ego and pride take over, until he becomes, in my eyes, a very unlikable character. The real hero of this story is Patroclus.

The last hundred pages or so are absolutely jam packed with action and drama. It’s a real roller-coaster of a ride and gets a bit emotional, so be warned! I’m looking forward to seeing what Madeline Miller has to offer in the future.

A fantastic book whether you are interested in the Greek myths or not! Buy a copy by clicking on the picture below.

10 thoughts on “The Song of Achilles – Madeline Miller”

Today did not go to plan at all. So instead I made the most of some rest time and read for a bit. I wasn't sure which to go for, but chose The Photograph. I was blown away with Penelope Lively's Moon Tiger last year, so hoping this will be a good one too. Same goes for Emily St. John Mandel - Station Eleven was wonderful, so I have high hopes for Last Night in Montreal. . Have you read any of these authors? 📖 . . . . . . . . . . #booksandtulips #booksandflowers #booksandroses #flowersmakemehappy #flowersandbooks #botanicalpickmeup #embracingtheseasons #readingplans #weekendreading #bookishsaturday #bookstagram #penelopelively #thephotograph #emilystjohnmandel #lastnightinmontreal #goingwiththeflow
I'm thinking of starting The Institute by Stephen King today. The only problem is that I'm away at the weekend and there's no way I'll be able to carry it with me! 😂 . I made a spring wreath at a workshop over the weekend. What do you think? It's not the sort of thing I'm good at making, but I'm pretty happy with it! 🌿 . . . . . . . . . . . . . . #stephenking #theinstitute #bookstagram #booksandplants #plantsandbooks #springwreath #mosswreath #botanicalpickmeup #aseasonalshift #stephenkingfan #ilikebigbooks #readingplans #myreadinglife #celebratingspring #wreathmaking
I love it when my tulips go a bit wild. 🌷 . How are you today? My Thursday has been quiet and uneventful, and I'm happy with that! ☺️ . . . . . . . . . . . . . #bookshelfie #tuliplove #tulipsgonewild #booksandflowers #flowersandbooks #bookstagram #botanicalpickmeup #shelfie #myeverydaymagic #flowersmakemehappy #booksandtulips #readyforspring #signsofspring #slowandsimpledays
My plans for the evening are to continue my latest read. I'm loving it so far. I find it's best to go into Michel Faber's books with almost no idea of the plot. I like to discover all the twists and turns as I'm reading. I can feel a twist coming at some point soon, and look forward to seeing how things pan out. . Have you read any Michel Faber? Which book is your favourite? At the moment it's hard for me to choose between The Crimson Petal and the White and Under the Skin. 📖 . . . . . . . . . . . #bookstagram #michelfaber #thebookofstrangenewthings #bookishtuesday #eveningplans #eveningreading #bookishthoughts #bookcoverlove #myreadinglife
I recently received an unexpected present, right when I was in the middle of a miserable month of sickness. This act of kindness lifted my spirits and helped me through a bad week. So thank you so much @carissatanton for the kind thought! 💙💚💛 The Book of Tea sounds like just my cup of tea 🍵 (sorry 😅) and I can't wait to learn all about the beauty behind the ritual of tea drinking in Japan. 📖 . Along with it, I'm drinking herbal tea and admiring my beautiful new tea illustrations. 😍 I'm especially in love with the teapot with the mountain design! Check out @carissatanton's account for more gorgeous illustrations. . What are you currently drinking? And what food/ drinks do you enjoy learning about? . . . . . . . . . . #kakuzookakura #TheBookofTea #teasim #teaillustration #teapotillustration #booksandtea #teaandagoodbook #penguinlittleblackclassics #thebeautyoftea #actsofkindness #bookishsaturday #bookstagram #ateamoment #obsessedwithtea
Today I picked up my book for the first time in about two months! I've been a bit sick and unable to read, so have been surviving off Netflix and audio books. My favourite audible discovery being the Frieda Klein series (thanks to @jenvcampbell for the recommendation) which got me through many sleepless nights. I've been gradually feeling much better over the last couple of weeks and it feels so good to be getting out, eating properly, cleaning the flat and, best of all, reading! I've also finally finished a chunky knit blanket that I'd put on hold. 😁 . But how have you all been? What's new in your lives and what have you been reading? 📖 . . . . . . . . . . . . . . . . . . . . #bookstagram #bookishtuesday #booksandhotdrinkstuesday #udonblanket #weareknitters #bookishknitter #knittingbookworm #knittingismytherapy #myreadinglife #booksandblankets #bookwormdiaries #cosyblanket